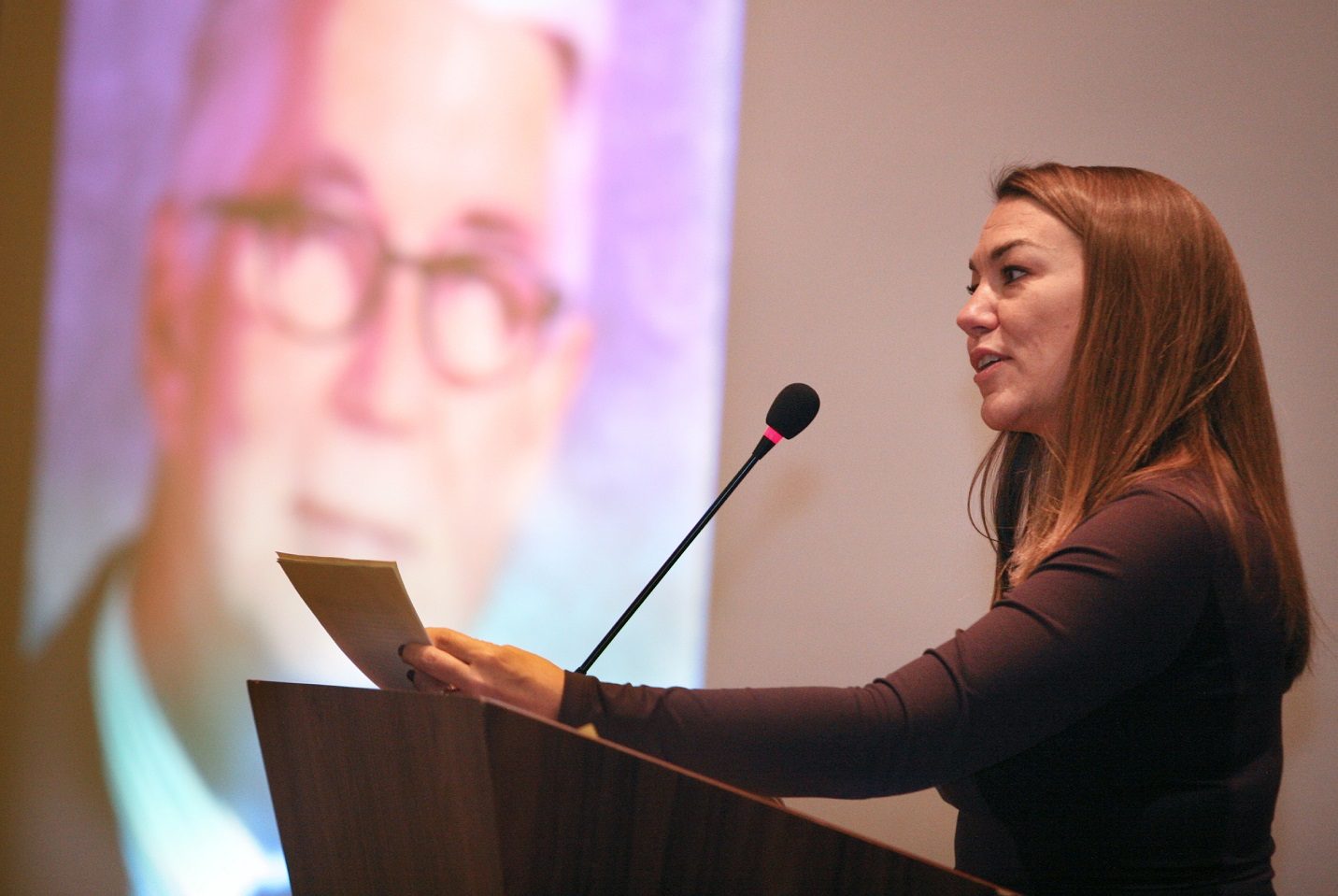 The following is the prepared text of a speech Lori Keekley gave on Saturday, Nov. 12 at the JEA/NSPA awards luncheon.

I’ve been very blessed in my life.

Many of you in this room and many beyond have instilled in me not only knowledge of journalism skills, but more importantly, you’ve developed my passion for the First Amendment and student media.

This passion for the First Amendment is rooted in an unexpected space. I grew up about 60 miles from here in a two-story brick house surrounded by fields in a small rural area of Indiana. Seven miles from my home was Hagerstown Jr-Sr. High School. It was here, and not a big metropolis, where I began to learn the importance of the First Amendment and its application to students. I learned this application through empowerment and not through censorship.

My passion started when my high school adviser, Mr. Dan Diercks, visited my English class to recruit for the newspaper and yearbook, and it continued through his empowerment of not only student decisions, but his support for student voices. This modeling happened when editors would make decisions with which he disagreed. It continued through his support of student voices. This support became apparent when Mr. Diercks and I discussed a clipping he posted on the 1988 Hazelwood vs. Kuhlmeier ruling. I still remember, now 28 years later, stating there’s no way this decision will remain the law of the land. Sadly, I was wrong and the spectre of Hazlewood continues in far too many communities — large and small.

The second person, Dave Adams, taught me the First Amendment applies even to voices with which we disagree. Dave and I had many conversations concerning the limits of free speech. Dave had to tire of my barrage of “but what about” questions. However, his patience formed my beliefs. During my time at Indiana University and work on the Arbutus and Indiana Daily Student, I learned that to deny dissenting voices violates the very open exchange of ideas journalism was founded upon. As Frederick Douglass said in 1840, “To suppress free speech is a double wrong. It violates the rights of the hearer as well as those of the speaker.”

I still hear both Dan and Dave in what I tell my students today. My students live what both advisers have instilled in me. When you walk into our student newsroom, you can’t miss the First Amendment. For Echo students, it is something we practice on a daily basis, and it’s not always a comfortable or popular place to be. In fact, my students have been chastised by other students for “allowing” someone to write an opinion column on Planned Parenthood and Black Lives/All Lives Matter — opinions with which my editorial staff disagreed. As long as I am advising, we will continue to work to celebrate all voices. Only by educating students on the importance of dissent will we change this perception that we all must adhere to one stance and live in a spiral of silence.

It’s no surprise that in 2011, the Knight Foundation reported “only 35 percent of teachers agree high school students should be allowed to report controversial stories in their students newspapers without the approval of school authorities.” It’s no surprise that in 2016 the same organization found 54 percent of the college students surveyed say they refrain from speaking at times because they are afraid that others might find the speech offensive.

These alarming statistics show the need to work to empower the voices of student journalists and the voice of the voiceless.

I’ve known this since I was a student editor at Indiana University and we chronicled the life of a 28-year-old resident and university speaker with AIDS in the 1994 Arbutus yearbook. The eight-page coverage was published five years after 18-year-old AIDS fighter Ryan White’s death. The story about Jay Sprinkle — the student subject of our story — showed the joy, hardships and prejudice he experienced. While working on the last yearbook deadline, we learned Jay had lost his fight against AIDS. This experience taught us more than just journalism. It taught us about humanity and the need to show we are all people. Seeing this story published after what Ryan White experienced reinforced the need to tell the story of the voiceless, and hopefully lead to a better understanding of the issue.

As an adviser, I see this need to understand humanity today as my own students continue to grapple in their understanding of the power of voices — whether they are their own or others. We learned this when we included extended coverage on race in April and May of this past year. I was stunned to see how many of my own students of color hesitated to write about their own experiences. After several lengthy discussions with the editors, the students of color started telling their stories. Their voices were heard.

Although this experience was formative for many of my students, the most powerful moment of my teaching career happened this year while at the NSPA/JEA convention in Los Angeles. Paula Kashtan, a former St. Louis Park student and then adviser, contacted me prior to our departure and asked if the Park students could meet with her students. St. Louis Park is a first-ring suburb of Minneapolis. Kashtan’s students attend school in South Central Los Angeles.

I loaded our 10 students and another teacher chaperone into a van and we traveled to meet the group for a 4 p.m. dinner in South Central L.A. During our dinner, students talked about the usual teenage concerns: prom, standardized tests, dating, media, staff cohesion and future plans. We ended with a lot of pictures and stories, but more importantly, we left with an understanding about having an open mind and that together we are better. This thread continued during Juan Antonio Vargas’ keynote about his Words Matter campaign, when one of her students joined our group. My students left the convention with more than just an understanding of their privilege. They left with an understanding of a need to show the voice of those silenced because of race and they saw their words really do matter. Upon returning, they set a goal of working to include more students of color on staff. Echo doesn’t fully reflect the student body yet, but based on our trajectory of inclusion from the past few years, we should next year.

Through empowering student voices, we can show how these stories matter, and they can be instrumental in changing perception. I’ve seen ignorance fuel hate and prejudice. When we encourage student storytellers we can provide readers with an insight into what others experience. We continually strive to tell stories.

It is only through highlighting alternative voices that we can make a change. Had someone told us in 1994 we couldn’t cover a story about an HIV positive student or the other controversial topics, we would have fought for these important stories to be covered.

I have faith we can make a change. In a year in which the Cubs won the World Series and a rookie won the 100th running of the Indianapolis 500, I believe this is the year of the underdog. We can continue to fight the Hazelwood spectre and empower student voices. We can continue to be the Daves and Dans — and maybe even your journalism adviser of years past — of today.

However, this fight is a three-part effort.

First, we need to show the need for these voices. During my time responding to Panic Button issues, I have heard personal stories concerning administration censorship attempts. I’ve seen student voices silenced, and I’ve seen otherwise positive students become dispirited. However, we’ve also seen positive stories about administrators standing with students concerning their ability to endorse candidates and cover other topics of importance to readers. We’ve seen at least 10 states actively work to pass New Voices legislation. We must show the need for student voices — and how student voices have been silenced in order to help SPLC [Student Press Law Center], SPRC [Scholastic Press Rights Commission] and the states working on free speech legislation build on the recent successes of Illinois, Maryland and North Dakota.

For the second part of this effort, I need your help. Candace Bowen, John Bowen and I have reconfigured Jane Blystone’s SPRC’s Making a Difference campaign. We want to show how important storytelling can be by soliciting contributions to this effort and promoting the monthly content. By showing how your students have made a difference, other teachers can empower their own students by showing these coverage exemplars. If you are on JEA’s listserv, we posted to the listserv earlier this morning and have information on SPRC’s website outlining how to submit.

The third involves all of us. We must continue to teach administrators and our communities about the First Amendment and its application to students. We must show that by empowering students and advisers, we can have a stronger, more informed democracy. To help, we have, through SPRC, provided some ways to help you broach the subject with administrators. We also sent this link through this morning’s message.

We owe it to our students — and readers and communities — to give them the best possible student media opportunities we can. As teachers, we need to have faith in, and empower, the students in both celebratory and challenging times.

I’ve been lucky. In high school and college, both of my advisers supported and empowered us. They were there when we screwed up — and yes, it happened often. As an IDS [Indiana Daily Student] editor said during the eulogy for Dave Adams, Dave would give us a beautifully crafted clock and each day, we would smash it against the wall. Instead of getting angry or frustrated, Dave would sigh and help us pick up the pieces and help us rebuild the clock. What did we do the next day? We threw the clock, but this time, it was against a different wall.

I always thought this was the best analogy for what it’s like to be an adviser. Both Dave and Dan taught me to embrace failure — for that is when we learn the most and need to support our students.

I’ve learned it doesn’t matter where you’re from, or your background. What matters is making sure you empower student voices so what they cover really can make a difference.

As Dave once said to me, “I’ve been very blessed in my life.” I’ve truly been blessed by working with all of you and the students and staffs I’ve worked with in the past.

So I’m ending this with a bit of selfishness. First, thank you to Dow Jones News Fund and co-sponsor Columbia Scholastic Press Association, for making this possible. It truly is an amazing experience. I’d like to thank the current and past St. Louis Park and Portage High School students, staff and administration. To the many of you who have mentored me, thank you. Some of you I met before I knew how big of a deal you really were. To the former winners of this award and the others recognized today, it’s an honor to be listed among you. To those of you on SPRC, thank you for your continued dedication to the First Amendment. Thanks also to JEA, NSPA and local committee for such a great convention.Thanks to the Minnesota and Indiana contingents.

To all of you, thank you all for being a positive influence and impact on all of our students. Also, thank you to my parents for teaching me the value of hard work and for your continued support. To my sons, Harris and Alex, and husband, Tom, thanks for your love and support. I wouldn’t be here without you.

Thank you all for contributing to my passions and for helping me be a better teacher and person.

I know I too have truly been blessed by all of you.