All three winners were among 20 students in the James Ansin/Peace Sullivan High School Journalism and New Media Workshop at the University of Miami. Guided by workshop directors Samuel Terilli and Fred Blevens, students produced a magazine, website and several videos.

Casey Chapter won Best Multimedia for her video about the Wynwood Maker Camp. Best Photography went to Manuel Fernandez for his photo accompanying a story about Miami’s transit system. Sabrine Brismeur won Best Reporting for her story about unreported cyberattacks on Florida businesses.

Blevens said, “We are delighted that our students were able to win all three scholarships. These three students were remarkably talented and extremely educable, a combination that almost always spells success. They also established themselves as extraordinary leaders among their peers.”

For the competition, each workshop director nominated up to three students, one for each category. The nominees submitted an essay about their interest in pursuing journalism in college and a piece of work produced at the workshop. Each winner will receive a $1,000 scholarship for the 2018-2019 school year.

Blevens said, “Sabrine chose to explore the huge cyberattack on the Port of Miami. What she discovered was an impenetrable veil of silence, one that lead to the all-important question of why. The answers she found were stunning and chilling.”

While Brismeur has enjoyed reporting and editing for her high school newspaper The Lariat, she says the Ansin/Sullivan Workshop unlocked a passion for research and investigative journalism.

Brismeur wrote in her essay, “I realized I loved the adrenaline of a telling interview and the stress of running around to make calls.”

“For many, journalism is about giving a voice to the voiceless and telling stories to the public. And while I agree, journalism for me has been more about the search: the tenacity, the honesty, the unapologetic attitude to learn what needs to be learned and put that information out for the world.” 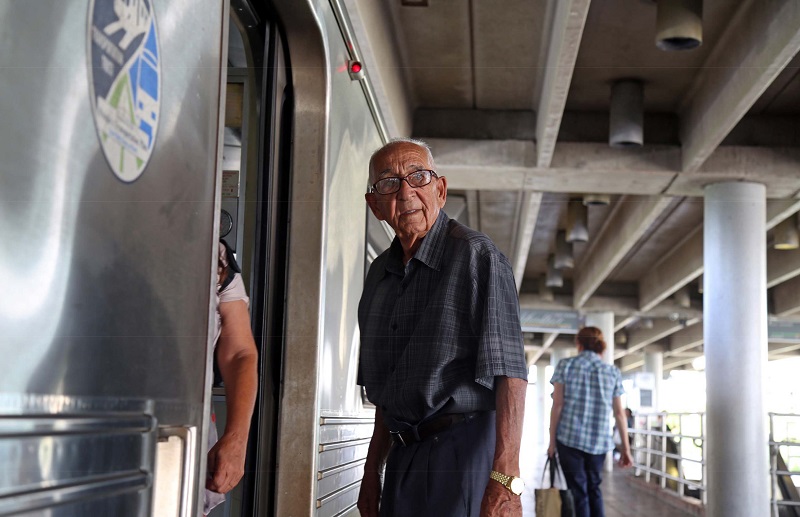 On his award-winning photo, Blevens wrote, “Manuel had a tough assignment that required scouting train passengers on Miami’s Metro to find those who might benefit from a new digital management system. He found an elderly man who depends on the train to visit his daughter a few days a week. The composition and framing tells the story of a nearly blind passenger who will be able to ride for years to come.”

Fernandez was drawn to writing in sixth grade and continues by working for the high school newspaper. His passion for reporting the truth motivates him to pursue journalism in college and hone his photography and videography skills.

Fernandez wrote in his essay: “Sifting through Twitter, online articles and even some official news organizations to find the truth in our society has become quite a chore for the average person. There has never been a better or more necessary time for the existence of professional, truth-seeking journalists.”

Blevens wrote, “Casey’s production skills were nothing short of marvelous. The shoots were very well executed and the editing is tight, fast and fun. This was just the best of a number of videos she produced, along with a by-lined story as well.”Chapter wrote she was inspired by the persistence and determination of her single mother, who overcame many challenges without a high school diploma to make a better life for her children.

“This is why I am determined to attend college and study journalism: I want to share my story – and other people’s stories – with the world.”