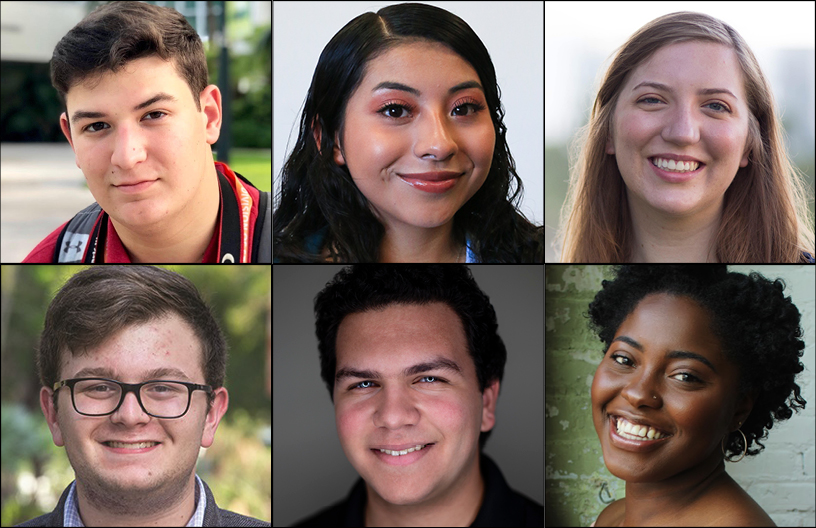 PRINCETON, N.J. — The Dow Jones News Fund selected six high school journalists from California, Florida and Minnesota as winners of $8,500 in its 2019 Summer Journalism Workshops Scholarship Competition. The competition recognized the best work by participants in 10 summer high school journalism workshops focused on health and wellness. The workshops were funded through a grant from the Robert Wood Johnson Foundation.

Four of the winners attended the James Ansin/Peace Sullivan High School Journalism and New Media Workshop at the University of Miami. Guided by workshop directors Samuel Terilli and Dr. Fred Blevens, students reported on a variety of health and wellness topics for Miami Montage.

David Perez won Best Data Journalism for his article and graphics about the gender wage gap in Miami. Caroline Wheeler-Hollis won Best Overall Health Reporting for her article about the lack of sex education in the Miami-Dade County Public Schools. Thomas Morcillo won Best Photography for his slideshow of Miami parents, students and teachers impacted by increased active shooter drills in schools. Alexander Someillan won Best Videography for his piece about the growing organic, farm-to-table trend at Miami restaurants.

The Best Reporting award went to Julie Hernandez from the Mosaic Journalism Workshop at San Jose State University. Hernandez reported on the plight of couples facing separation from their U.S.-born children. Guided by Sharon Noguchi and Joe Rodriguez, students at Mosaic produced news, feature, sports, and opinion pieces in both English and Spanish published in The Mercury News.

Ayo Olagbaju was given an “Award of Excellence” for her article about a synchronized swim team with a social justice mission produced at ThreeSixty Journalism’s News Reporter Academy at the University of St. Thomas in St. Paul, Minnesota.

Workshop directors nominated students in each category recommending their best work. Nominees submitted essays about pursuing journalism in college and their career plans. Five winners will receive $1,500 college scholarships from the Fund for the 2020-2021 school year. Olagbaju, who won an Award of Excellence, will receive $1,000.

The winners were selected by Fund alumni Yelena Dzhanova, a news associate at CNBC; Sabrina Bodon, a staff writer at the Chattanooga Times Free Press; and Brooke Eberle, a digital producer for the USA TODAY Network in Wisconsin.

Julie Hernandez – Best Reporting
Julie Hernandez won for “DACA recipients wonder: What about our kids?” a story she wrote for Mosaic. She reported on the plight of couples temporarily spared from deportation by the Deferred Action for Child Arrivals program, or DACA, and who fear separation from their U.S.-born children.

In his nomination for Julie, workshop director Joe Rodriguez wrote: “She had never done any journalism up to the Mosaic workshop, but she never complained when we threw challenging, journalistic vagaries -ledes, nut grafs and kickers -at her. She caught on quickly, faster and more eagerly than my college students. But even before that, her humanity and compassion for others, were notable for such a young writer.”

For Julie, it was about tapping her creative writing skills to craft a compelling story.

“That’s what I love most about journalism. I was creating the story myself but I was showcasing real moments in people’s lives,” she wrote in her essay.

Julie is a senior at Downtown College Prep La Primera in San Jose, California. She hopes to go to college next fall at a University of California campus in Southern California.

He wrote in his essay: “In capturing the moments around me, I have found that informing others on the experiences they cannot witness themselves is an invaluable element of creating a greater understanding among different groups – a means, perhaps, to self-healing and resolution of conflict.”

At the Ansin/Sullivan Workshop, Thomas pitched a story on the impact of active shooter drills on students. He used black and white photography to create a compelling slideshow.

Blevens, the workshop director, wrote, “The results were stunning. His mastery of the camera blended well with the very emotional words he gleaned from interviews. A great piece of visual storytelling.” 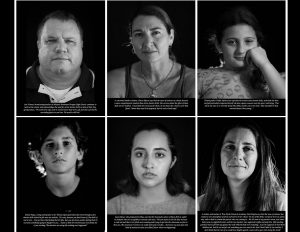 Theresa Malloy, ThreeSixty Journalism workshop co-director, recommended Ayo for the award. She wrote, “Ayo Olagbaju is a natural storyteller who is curious and passionate about telling meaningful stories. She definitely has a future as an innovative storyteller in the journalism field.”

Ayo started writing at age 3 and never stopped. She found journalism at the ThreeSixty workshop.

She wrote in her essay, “Once I was introduced to the world of journalism, I realized that it was something I wanted to be part of. It incorporated a lot of the things I loved, including writing and speaking.”

“Miami Still Has Work to do in Battle to Close Its Wage Gaps” used data from a Status of Women in Miami-Dade County report which found women in Florida earn 87 cents for each dollar earned by a man. Perez used this data to create several infographics for print and digital versions of his story.

Ansin/Sullivan Workshop director Blevens wrote of David, “After writing his story, he set out to develop an infographic for the magazine, then learned the coding for interactive data on the web, flipping is print version to a three-level version on the web. Terrific extra effort that adds great value to a very important story.”

Blevens’ nomination said, “When Alexander pitched this story, we were concerned with how he’d find a focus during the few days he had to report. He got after the story with great passion, first writing an excellent piece, then producing a video that took a visual trajectory that was crisp, engaging and informative.”

Alexander has been honing his on-air reporting and video editing skills working for the school television station since freshman year. Along the way he has earned several awards for his body of work.

With his experience at the TV station and Miami Montage, Alexander is ready to pursue a career in broadcast journalism.

“I now find that I am passionate about journalism and I’m looking forward to this career with much enthusiasm,” he wrote.

“I feel passionate about starting hard conversations, opening up those taboo subjects, and sharing the truth,” Caroline wrote in her essay.

Ansin/Sullivan Workshop director Blevens praising her tenacity, said, “Caroline struggled for a few days, rejected repeatedly by potential sources who didn’t want to talk. After finding a few cooperative moms, the story broke wide open and Caroline capitalized. Her angle was remarkably original for a high school student, creating a narrative that is tough and accessible.”

“Society as a whole doesn’t want to talk about minors having sex but regardless of that silence, the issue remains. Starting that necessary conversation about the need for sex education was an incredible experience,” Caroline wrote.