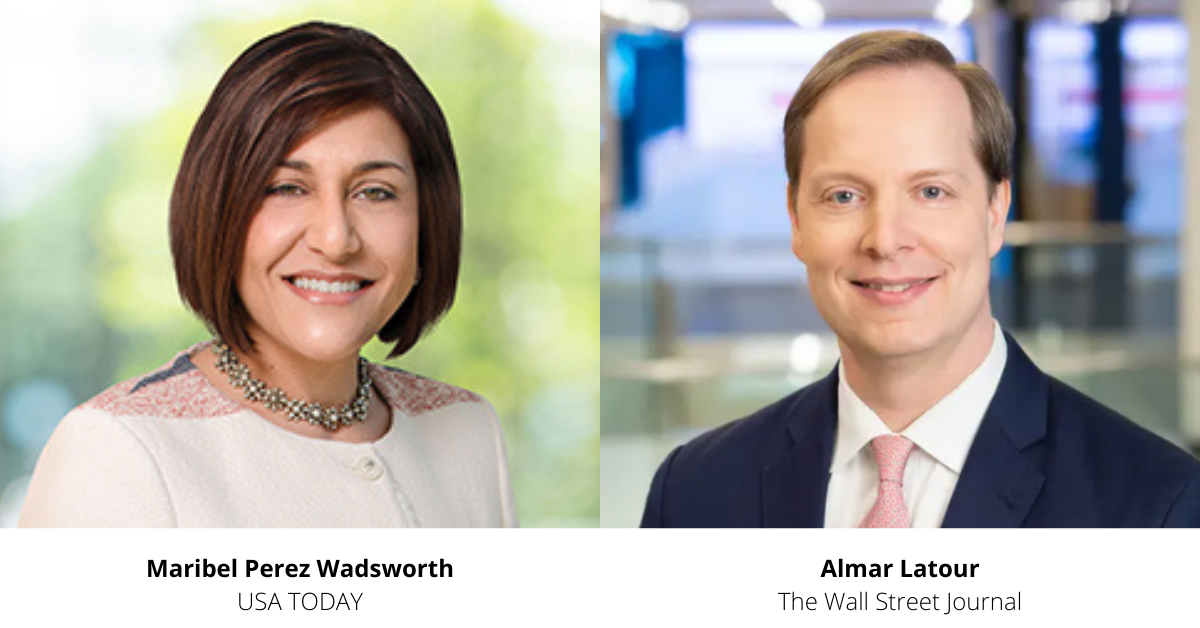 PRINCETON, N.J. — Almar Latour, chief executive officer of Dow Jones and publisher of The Wall Street Journal, and Maribel Perez Wadsworth, president of the news division of Gannett Media and publisher of USA TODAY, have been elected to the board of directors of the Dow Jones News Fund.

“Keen support from the chief executive of Dow Jones has been a special part of the News Fund’s history and success story, and Gannett has long been an active, valued partner. We’re delighted to welcome these creative and solution-oriented leaders who bring an intimate understanding of the complex challenges local, national and global newsrooms are facing,” said Brent Jones, president of the News Fund’s board of directors.

Latour has led Dow Jones since 2020, through a period of significant growth and realignment, accelerating the company’s consumer subscription revenues, growing its business-to-business portfolio and leading major acquisitions.

Wadsworth runs the news division of Gannett Media, overseeing more than 4,000 journalists across 230 local news organizations and its flagship publication USA TODAY. She is a recognized leader in the development of women and minority leaders in the newsroom.

The Wall Street Journal and Gannett’s newsrooms have a long history of partnering with the News Fund to provide paid internships, and in many cases hiring their interns.

“I am pleased to join the Dow Jones News Fund board of directors,” Latour said. “Their work has educated countless young journalists, which is especially important at this moment when fact-based reporting has never been more crucial.”

“I am honored to join the Board of Directors of the Dow Jones News Fund. It is imperative that we increase our investment in the future of journalism through our commitment to diversity and inclusion and by cultivating the next generation of journalists. I am excited to help advance this important mission,” said Wadsworth.

About Almar Latour
Prior to his appointment as CEO of Dow Jones and publisher of The Wall Street Journal, Latour served as publisher of Barron’s Group and executive vice president of Dow Jones. He oversaw the growth of Barron’s Group business and luxury brands Barron’s, MarketWatch, Financial News, Mansion Global and the Dow Jones Wealth and Asset Management Group and was responsible for all editorial and business operations.

He also worked as a staff reporter for The Journal in New York, London, Stockholm and Brussels. Latour began his career as a news assistant at The Journal’s Washington, D.C. bureau.

About Maribel Perez Wadsworth
Wadsworth has been with Gannett for more than 25 years, beginning as a reporter at the Rockford (Illinois) Register Star. Today, Wadsworth runs the news division of Gannett Media, overseeing more than 4,000 journalists across more than 230 local news organizations and its flagship publication USA TODAY. She is a recognized leader in the development of women and minority leaders in the newsroom. In 2015, she was named Gannett’s first Chief Strategy and Transformation Officer. She helped to architect the company’s digital subscription strategy and created its Innovation Lab to foster intrapreneurship and human-centered design across the organization. In 2016, then-U.S. Secretary of Commerce Penny Pritzker appointed Wadsworth to a two-year term on the National Advisory Council on Innovation and Entrepreneurship. She currently serves on the board of directors of the Associated Press, the News Media Alliance, the International News Media Association and Skillshare. She also is a trustee of her alma mater, the University of Miami.