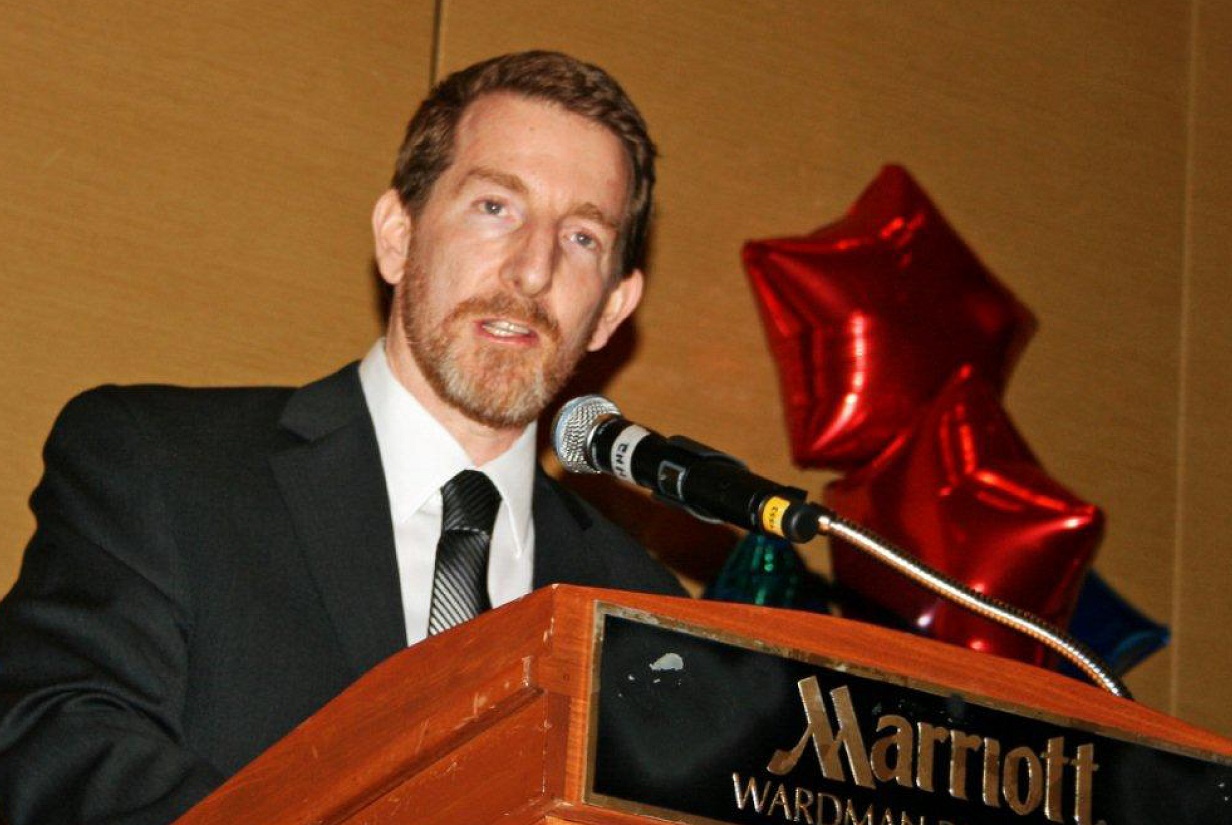 Paul Kandell accepting his award at the 2009 JEA/NSPA Fall Convention.

Richard S. Holden, executive director of the Fund, said, “Paul brought a wealth of journalism experience into the classroom, and it shows in the quality of the media he advises. He also played a large role in working with the University of California to ensure journalism courses were treated with the respect they deserve. Paul joins a long line of dedicated and talented advisers who have been honored as our journalism teacher of the year.”

In addition to original content, his student staff at The Paly Voice produces a Web site which contains material from three other journalism teachers’ classes and publications.

Kandell said, “I work with amazing people who are the best at what they do. I feel lucky and I’m delighted to be serving as Teacher of the Year. I realize I am part of a team. Part of my year is going to share with my peers at other schools across the country the vision of that team and how it works.”

The program honors the nation’s top journalism teacher, four Distinguished Advisers and several teachers cited as Special Recognition award winners. A panel selected Mr. Kandell and eight other teachers based on submissions by 26 teachers that included their student publications, résumés, letters of recommendation and responses to 14 questions.

The panelists were: Karl Grubaugh, 2008 National High School Journalism Teacher of the Year, Granite Bay (Calif.) High School; Logan Aimone, executive director, National Scholastic Press Association and a 2005 Distinguished Adviser; Candace Perkins Bowen, scholastic division chair for the Association for Education in Journalism and Mass Communication, executive director of the Center for Scholastic Journalism at Kent State University and 1989 Teacher of the Year, and Diana Mitsu Klos, senior projects director at the American Society of News Editors and a member of the Fund’s board of directors.

Kandell will accept his award at the November National High School Journalism convention in Washington, D.C. He will also attend the April convention of ASNE and the college-level journalism educators’ meeting in August in Denver. The Teacher of the Year is also featured at the Columbia Scholastic Press Association, a co-sponsor, in New York City each March. Additionally, he can attend a professional-level seminar offered at the Poynter Institute for Media Studies, St. Petersburg, Fla., and is a paid columnist for the Fund’s free quarterly newspaper, Adviser Update.

The Teacher of the Year and four Distinguished Advisers will receive free subscriptions to The Wall Street Journal Classroom Edition, a co-sponsor, which includes 30 copies of the full-color newspaper for students, a free Teacher Guide, unlimited access to the Classroom Edition Web site and a daily Journal. Poynter Institute will also give the top teachers and their students access to webinars through its NewsU training project.