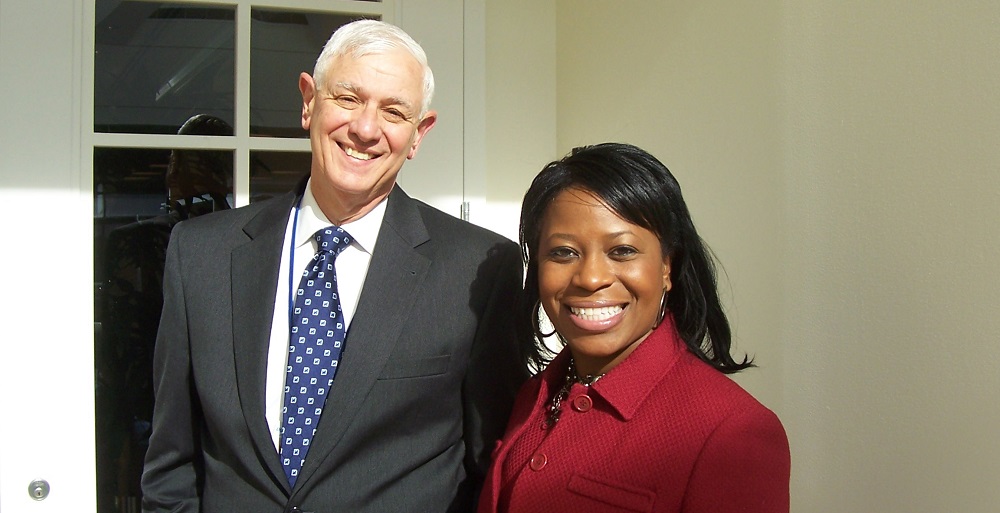 Richard J. Levine and Pamela Fisher at the Nov. 4, 2011 DJNF board meeting.

PRINCETON, N.J. — Pamela Fisher, vice president of corporate diversity at News Corporation, was elected to the board of directors of the Dow Jones News Fund at its annual meeting Nov. 4.

“We are delighted to welcome Ms. Fisher to the board,” said Richard J. Levine, president of the Fund’s board. “She brings deep knowledge of diversity issues as well as journalism experience that will serve the News Fund well.”

Ms. Fisher said, “As a DJNF intern in the 1990s, this is a full circle moment for me and I appreciate the opportunity to pay it forward.” She added that her service on the News Fund board represented a unique opportunity to address two of News Corp.’s key diversity initiatives – workforce representation and community investment through education outreach.

Ms. Fisher was appointed to her current postition in November 2010 and is based in New York City. As the primary diversity liaison between the company and its key stakeholders, she develops and implements a comprehensive, integrated approach to diversity across FOX News, FOX Television, HarperCollins, the New York Post and The Wall Street Journal. She is responsible for strengthening News Corp.’s relationships and market share with diverse consumers and communities domestically and globally.

Previously, she was director of government relations for News Corp. in Washington, D.C., where she represented the company and its businesses’ legislative and regulatory interests before Congress and government agencies. She was instrumental in increasing awareness of the company’s diversity initiatives among elected officials. She began her career with News Corp. at KSAZ-TV and WTTG-TV, the FOX-owned and -operated stations in Phoenix and Washington, D.C., respectively. During her tenure at FOX Television Stations, she developed her broadcast management skills working directly with the general manager and station executives

to achieve desired profit margins and high ratings. She has also worked at National Geographic Channel, where she assisted in the effort to launch international channels based on National Geographic’s highly-respected, multicultural and educational brand.

She attended George Mason University in Fairfax, Va., and Arizona State University in Phoenix where she earned a bachelor’s degree in communications with a minor in broadcast journalism.

Her memberships in service organizations include the Congressional Black Caucus Foundation Corporate Advisory Council, the Minority Media Telecommunications Council Regulatory and Legislative Task Force, the National Association of Minority Media Executives, Women in Cable and Telecommunication, Eagle Academy Foundation: Educating Boys of Color, So Others Might Eat and Horton’s Kids.