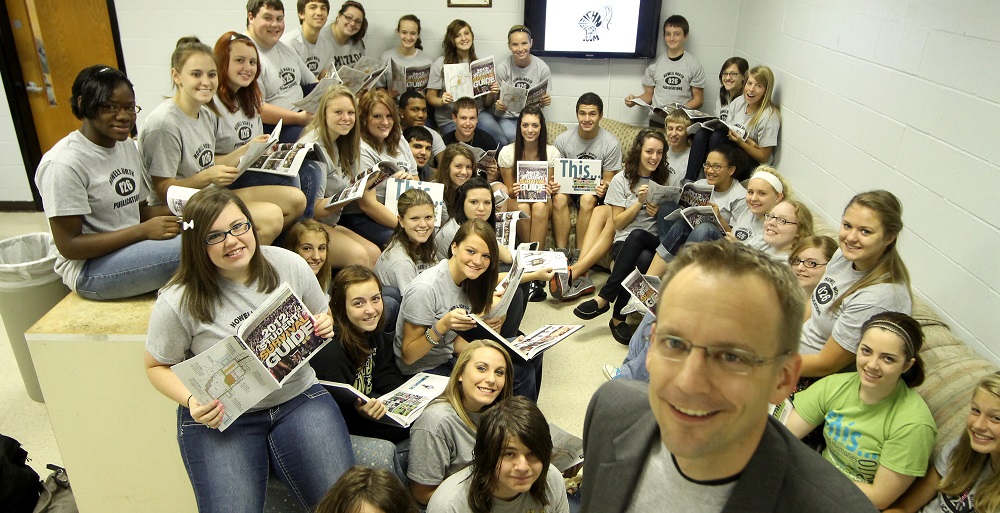 Richard S. Holden, executive director of the Fund, said, “Aaron is a dynamic, hardworking yet self-effacing teacher. He’s a leader in scholastic journalism today and for the years ahead.”

Mr. Manfull credited his success as a journalism teacher and adviser to his mother, literally. Donna Manfull was his newspaper and yearbook adviser at Washington (Iowa) High School.

“She is the foundation of how I run things and what I do because of what I learned from her,” he said.

Those early experiences, opportunities to meet other leaders in Iowa journalism, attend workshops and instruct while in college formed a pivotal network and relationships.

His platform will focus on helping other teachers keep their programs functioning, thriving and, hopefully, arresting the decline in journalism programs in the country today. While similar programs might compete, media advisers, need to support one another, he said.

Manfull has reached out individually to dozens of St. Louis area advisers to lend a hand and many have positively responded to this collaborative approach to scholastic journalism.

“It’s local support teams that can help one another…We need to reach out to those who might not have the network that we have so that they don’t feel like they are alone on an island. We all need to be working to help one another.”

The Teacher of the Year program honors the nation’s top journalism teacher, four Distinguished Advisers and several teachers cited as Special Recognition award winners. A panel selected Mr. Manfull and eight other teachers based on submissions that included their student publications, résumés, letters of recommendation and responses to 14 questions. He was a DJNF Distinguished Adviser in 2009. He was named among 35 Influential People in Social Media by the Poynter Institute for Media Studies and received a Pioneer award from the National Scholastic Press Association in 2010.

The panelists were: Valerie Kibler, 2010 National High School Journalism Teacher of the Year, Harrisonburg (Va.) High School; Dr. Vanessa Shelton, executive director of Quill and Scroll, a professor at the University of Iowa and head of the scholastic division of the Association for Education in Journalism and Mass Communication, and Diana Mitsu Klos, senior projects director at the American Society of News Editors and a member of the Fund’s board of directors.

Mr. Manfull will receive his award at the November National High School Journalism convention in Minneapolis. He will also attend the April convention of ASNE and the college-level journalism educators’ conference in August. The Teacher of the Year is also featured at CSPA, a co-sponsor, in New York City each March. Additionally, he can attend a professional-level seminar offered at the Poynter Institute for Media Studies, St. Petersburg, Fla., and is a paid columnist for the Fund’s free quarterly newspaper, Adviser Update.

The Teacher of the Year and four Distinguished Advisers will receive free subscriptions to The Wall Street Journal Classroom Edition, a co-sponsor, which includes 30 copies of the full-color newspaper for students, a free Teacher Guide, unlimited access to the Classroom Edition website and a daily Journal. Poynter Institute will also give the top teachers and their students access to webinars through its NewsU training project.

Mr. Manfull has been teaching and advising media for 13 years since graduating from Truman State University, Kirksville, Mo., in 1998 with a master’s degree in education after earning his bachelor’s in communication there. He went to St. Charles after teaching and advising at Newton (Iowa) Senior High School.

Two students have won the Robert F. Kennedy Journalism Award, a national honor, for coverage of the problems of the disadvantaged. The newspaper won a Gallup Award from Quill and Scroll and FHNtoday.com was named a Pacemaker by NSPA. The high school was named a First Amendment Press Freedom Award winner in 2011 by JEA and a Cornerstone Award recipient. As the media program at the high school expanded, Beth Phillips was hired last year as an assistant adviser.

Mr. Manfull is a frequent speaker at summer journalism workshops for numerous press associations and at Ball State, Kansas State, Missouri and Iowa universities, and the ASNE Reynolds Institutes. He directs Media Now-STL, a summer digital media workshop focusing on multimedia, web and design. He called his wife Kate, a media professional with her own firm, his co-adviser, who chaperones trips and consults with students on marketing and design. They have two children, Michaela and Kane.