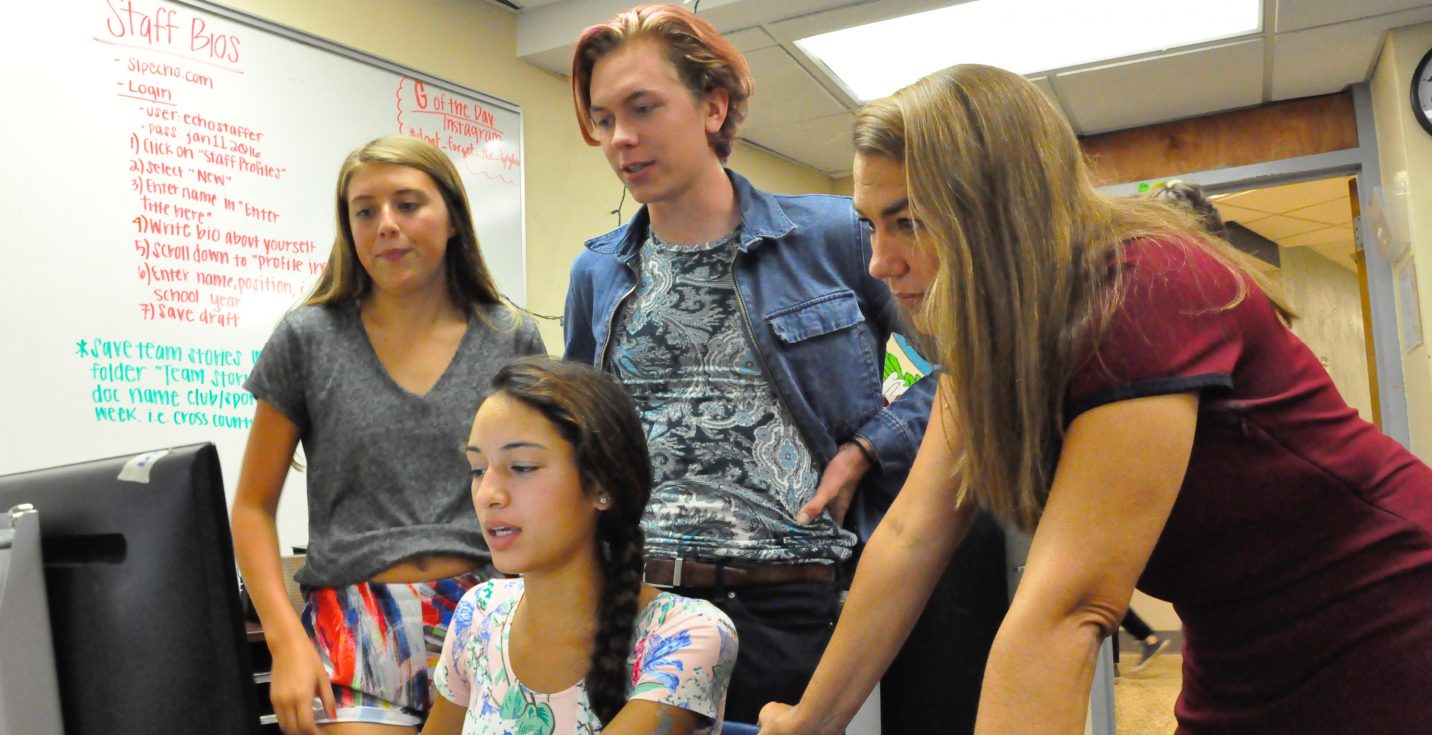 PRINCETON, N.J. — The Dow Jones News Fund is pleased to announce Lori Keekley is the 2016 National High School Journalism Teacher of the Year.

Keekley, an English teacher and media adviser from St. Louis Park (Minnesota) High School, was selected from among 25 teachers nationally.

The selection panel included 2015 Teacher of the Year Mitch Eden of Kirkwood (Missouri) High School; Richard S. Holden, a News Fund board member and former executive director; Jeffrey Browne, chair of the Scholastic Division of the Association for Education in Journalism and Mass Communication and a journalism instructor at the University of Colorado-Boulder; Vanessa Shelton, executive director, Quill and Scroll; and Lynne DeLucia, editor, Connecticut Health Investigative Team.

Linda Shockley, Dow Jones News Fund managing director, said, “Lori Keekley has done all the right things to distinguish herself as a media adviser and teacher. She shines through her work with her students and in service to the broader profession. We are extremely pleased to have her as this year’s representative of the best in scholastic journalism.”

The awards will be presented at the JEA/NSPA Fall National High School Journalism Convention in Indianapolis November 12.

GIVING A VOICE TO THE VOICELESS

As Teacher of the Year Keekley plans to emphasize the importance of empowering student voices to produce robust student media and safeguarding their First Amendment rights.

As The Echo adviser, Keekley has given her students the power to report on a wide range of issues, from police brutality involving people of color to the plight of undocumented residents to a school board policy on gender identity.

“Through empowering student voices, I want to encourage teachers to show their students these stories matter, and they can be instrumental in changing perception.”

The selection panel praised Keekley’s commitment to student press rights and her tireless efforts to bolster the scholastic journalism community.

Mitch Eden said, “Lori’s contribution and service to scholastic journalism on a local, state and national level has been outstanding. More than that, her advocacy for her kids and their First Amendment rights is impressive.”

Vanessa Shelton added, “Her contributions are far-reaching, from the classroom instruction she so expertly provides her students to the curriculum she develops for teachers and shares via the Journalism Education Association.”

Jeff Browne said, “Lori is a consummate high school journalism teacher. Her commitment to her students, her craft, her profession and her community are unparalleled.”

Keekley said, “I am humbled and honored to represent media advisers. It’s an opportunity to showcase the ways media advisers empower students to create great work and to show the difference they make in their schools and communities. It truly is an honor.”

Keekley has taught for 17 years, and is entering her 15th year teaching and advising The Echo newspaper and website. The Echo staff won the First Amendment Press Freedom Award, CSPA Hybrid Gold Crown Award and NSPA Website Best of Show (small school) in 2016, and has earned dozens more awards during her tenure at St. Louis Park High School. She was also a 2010 Distinguished Adviser.

Keekley will speak and receive a plaque, a pin and a laptop computer for her classroom during the National High School Journalism Convention. In addition, a graduating senior at St. Louis Park High School will receive a $1,000 scholarship in her honor. She will also have access to webinars from the Poynter Institute for Media Studies. CSPA will underwrite her participation in its spring convention in New York City where she will speak and present workshops.

Keekley lives in St. Louis Park, Minnesota, with her husband Tom and children Alex, 9, and Harris, 12.

The Fund also named four Distinguished Advisers. These honored teachers will award $500 scholarships for graduating seniors and subscriptions to WSJ.com courtesy of the publishers of The Wall Street Journal.

Terry Cassreino has advised the school streaming sports radio station, the newspaper and the yearbook at St. Joseph Catholic School in Madison, Mississippi, for the past four years.

Cassreino spent more than 24 years as a reporter, political columnist and editor at Mississippi newspapers including positions as capitol bureau chief for The Sun Herald, managing editor of The Madison County Journal, and assistant managing editor for The Meridian Star and at the Hattiesburg American.

Cassreino was named the 2016 Broadcast Adviser of the Year by the Mississippi Scholastic Press Association and a 2015 Special Recognition Adviser by the Fund.

Patrick Johnson of Antioch (Illinois) Community High School is in his sixth year teaching (his fourth at Antioch; the first two at Marquette University) and fourth year advising the Tom Tom, a website and 10-issue student life magazine. During his tenure at Antioch, Johnson has grown the journalism program from 12 students to 90 this fall, and oversaw the addition of a new media lab, broadcast studio and photography studio.

Johnson was named a 2016 Rising Star by JEA and the 2015 Newspaper Adviser of the Year by the Kettle Moraine Press Association (KEMPA). He is a board member of Quill and Scroll, KEMPA and the JEA Digital Media Committee.

Dave Riggs was a professional journalist for 27 years before joining the faculty at Wenatchee (Washington) High School four year ago. He advises The Apple Leaf (whsappleleaf.com) newspaper and website, and teaches four journalism classes.

Riggs used his professional connections to build an internship program for high school students at the local newspaper, radio station and magazine. Riggs wrote in his application, “The experiences these students get through working in professional media has helped launch them on their way to success at the college level….it all begins in the classroom at the high school, instilling high standards, and expecting students to work and behave like professionals.”

Riggs was the recipient of the Fern Valentine Freedom of Expression Award from the Washington Journalism Education Association (WJEA) this year.

When Shipp started her job at Johnston, she taught six periods of freshman English and a period of yearbook. Today, she is one of the few full-time journalism advisers in the state of Iowa. She has 155 students signed up for the one-semester journalism course this fall, and will continue advising the newspaper and online site.

Shipp is the JEA Iowa director, a 2015 Yearbook Adviser of the Year and a 2000 DJNF Special Recognition Adviser.

Each Special Recognition Adviser will be presented a plaque at the National High School Journalism Convention and a digital subscription to WSJ.com.

In 2016 Burgett was recognized as the Missouri Journalism Teacher of the Year by the Missouri Interscholastic Press Association.

Mark Harrison is a teacher and media adviser at T.C. Roberson High School in Asheville, North Carolina. He has advised The Golden Fleece newspaper for 16 years, broadcast TV for nine years, and website for five. He teaches American Literature, Print, Broadcast and Online Journalism courses.

Harrison is a board member and past president of the North Carolina Scholastic Media Advisers Association.

Teresa Scribner is entering her fifth year as a media teacher at Cleveland High School in Seattle, Washington, after a 17 year career as a visual journalist at The Seattle Times and other newspapers. She advises The Cleveland Journal newspaper, yearbook and a news broadcast and teaches Journalism Writing, Graphic Arts and Multimedia.

Scribner was named the 2016 Washington State Journalism Adviser of the Year by the WJEA and is a recipient of the 2016 Rising Star Award by JEA.

Jami Williams is beginning her eighth year teaching journalism and advising at Mexico (Missouri) High School. Prior to being a teacher, Williams was a radio and newspaper journalist – experience she brings to her six journalism classes and the production of the school newsmagazine and www.mhsgrowl.com.

Williams has been working with the American Society of News Editors to create lesson plans and learning modules for the www.schooljournalism.org website and also created their Classroom in a Box curriculum for new advisers.

Williams is an executive board member of the Missouri Interscholastic Press Association.