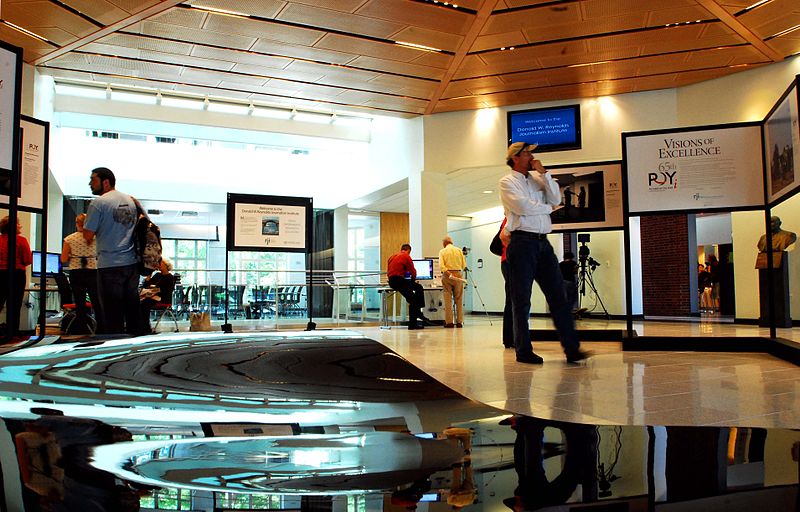 Reynolds Journalism Institute Lobby by moohappy is licensed under CC BY 2.0. http://bit.ly/2jKg8Xn

RESTON, Va. — The American Society of News Editors will receive $4,646,100 over five years from the Donald W. Reynolds Foundation to sustain the country’s premier training opportunity for high school journalism advisers from 2010 through 2014.

The Reynolds High School Journalism Institutes, two-week programs held at five accredited university journalism schools during the summer, are innovative and demanding. The Institutes lay essential groundwork for teachers to empower students to produce quality journalism, and understand how the First Amendment and news literacy are integral to American democracy.

“In too many instances, youth journalism programs are under stress or marginalized. To counter this, Institute alums and their students emerge as leaders, making the case that journalism has strong interdisciplinary value, imparts practical life skills applicable to any career and creates a sense of community,” said ASNE President Martin Kaiser, editor of the Milwaukee Journal Sentinel. “We are most grateful to the Reynolds Foundation for sharing in this vision and making this generous and substantial commitment.”

The Institute received a $2.3 million grant from Reynolds for 2007-09 and was funded by the John S. and James L. Knight Foundation from 2001-06. Knight has remained committed to other core programs of the ASNE High School Journalism Initiative, including my.hsj.org, the world’s largest host of online youth news, and hsj.org, an education site.

According to ASNE Executive Director Scott Bosley, since its inception, this agile, innovative initiative has been shaped and continues to flourish under the leadership of Diana Mitsu Klos, senior project director and grant writer, along with online director Craig Branson and project coordinator Connie Southard.

During the two weeks of training, 175 competitively selected journalism advisers are steeped in journalistic practices and responsibilities, ethical decision-making and news media freedom issues, plus learn to maximize online and digital platforms and integrate new technologies. In the past three years, 434 teachers were accepted to the Institute. Of this group, 232 (54 percent) taught at schools where young people of color were in the majority, and 86 (20 percent) identified themselves as people of color.

Every key expense is covered by the grant, including transportation, housing, meals, continuing education credits and instructional materials. This removes financial barriers for the majority of teachers who otherwise could not afford to pay for this kind of specialized training or who work in disadvantaged school districts.

In 2010, the Reynolds Institutes will convene at:

The application deadline is March 1. Each school will host 35 teachers recruited by ASNE.

The Donald W. Reynolds Foundation is a national philanthropic organization founded in 1954 by the late media entrepreneur for whom it is named. Headquartered in Las Vegas, it has committed over $100 million through its journalism initiative.

The American Society of News Editors is comprised of top editors at news organizations; deans, directors and endowed chairs at accredited journalism schools; and leaders of journalism foundations and training organizations.