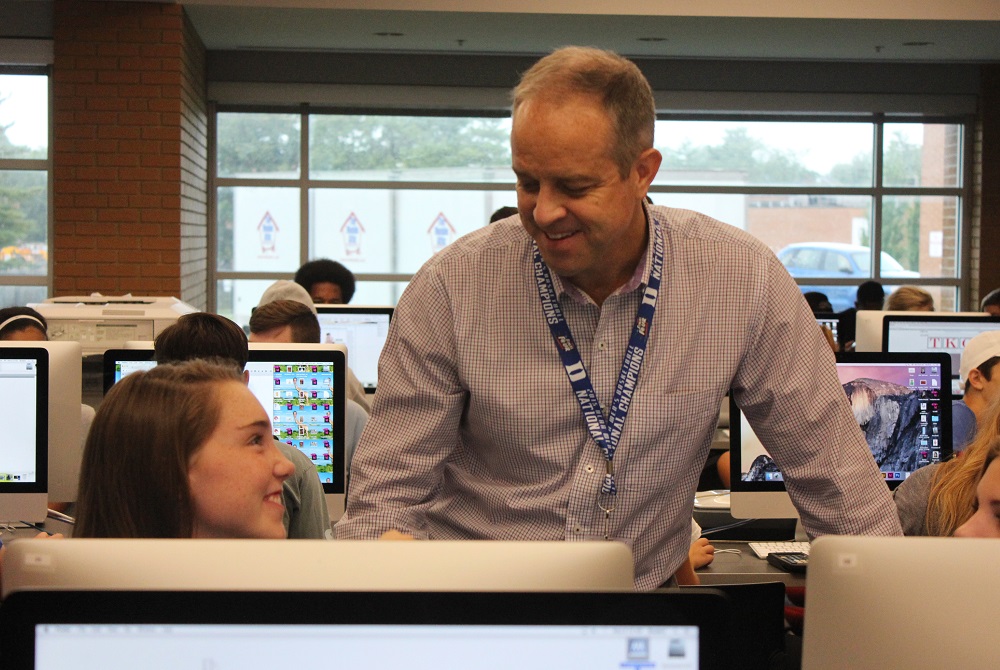 PRINCETON, N.J. – The Dow Jones News Fund is pleased to announce Mitch Eden is the 2015 National High School Journalism Teacher of the Year.

Eden, a journalism teacher and media adviser from Kirkwood (Mo.) High School, was selected from among 28 teachers nationally.

Mitch Eden, Teacher of the Year

Eden has taught for 19 years, and is entering his 10th year teaching and advising the Kirkwood Call newsmagazine and website. The Kirkwood Call staff won the First Amendment Press Freedom Award and CSPA Silver Crown Hybrid Award in 2015, and has earned dozens more awards during Eden’s nine years at Kirkwood. Eden was also a 2014 Distinguished Adviser.

Eden said, “I am truly honored and humbled by this award. I feel I am simply a representative of all the advisers in scholastic journalism education because I have so much respect for my peers and what they do to help kids and our profession. I hope this platform allows scholastic journalism to share the spotlight for a moment highlighting all the good in our profession.”

Linda Shockley, Dow Jones News Fund managing director, said, “Mitch Eden is that well-rounded seasoned journalism teacher and adviser who stays alert to, even anticipates, the challenges his students will face, prepares them to meet them, then stands back to let them learn, thrive and achieve. We are looking forward to working with him.”

As Teacher of the Year Eden plans to emphasize the importance of service journalism.

He said, “There is so much good our kids are doing right now. I hope to showcase some of the quality journalism being done and speak to the value of service journalism. We can always use more good, and service journalism can educate our audience and spur healthy discussion of important topics.”

“Mitch Eden encourages his students to be leaders inside and outside of the workroom as the adviser to the newspaper and yearbook at Kirkwood High School. It is through this empowerment that his staffs take on the toughest issues today.”

Hall said, “I selected Mitch Eden as Teacher of the Year because his application materials reflected consistent, sustained excellence. Part of the responsibilities of the Dow Jones News Fund’s Teacher of Year program is to speak to other student media teachers — to educate them, to encourage them, to inspire them. Eden impressed me as the one candidate that I’d most want to hear discuss his methods for success.”

Eden will speak and receive a plaque, a pin and a laptop computer for his classroom during the National High School Journalism Convention, Nov. 14 in Orlando, Fla. In addition, a graduating senior at Kirkwood High School will receive a $1,000 scholarship in his honor. He will also have access to webinars from the Poynter Institute for Media Studies in St. Petersburg, Fla. CSPA will underwrite his participation in its spring convention in New York City where he will speak and present workshops.

He lives in Columbia, Ill., with his wife Tanya and children Cameron and Madison.

The Fund also named four Distinguished Advisers. These honored teachers receive $500 scholarships for graduating seniors and subscriptions to WSJ.com courtesy of the publishers of The Wall Street Journal.

Rachel Rauch of Homestead High School, Mequon, Wis., has been teaching for 19 years and is entering her fifth year advising the Highlander newspaper and its website, homesteadhighlanderonline.com.

Rauch took over Homestead High School’s journalism program five years ago with the task of bringing the courses and curriculum into the 21st century. As a result, the newsroom has gone digital and amped up its social media and visual storytelling.

Rauch earned the 2015 Excellence in Teaching Award from her district and the 2015 Kettle Moraine Press Association Newspaper Adviser of the Year Award.

Amanda Thorpe is a teacher at both Portage Community and Portage Northern high schools in Portage, Mich., and is the founding adviser of the Portage Community Spitfire newspaper and website, www.portagecommunityspitfire.com. Thorpe is entering her eighth year teaching English and History and running the journalism program she founded.

Because of her efforts Portage Community H.S. is the only alternative high school to become a member of the Michigan Interscholastic Press Association. Her students won the MIPA Spartan Award. Thorpe was awarded the MIPA Golden Pen Award, and received the Cornerstone University Distinguished Alumni Award and the Portage Public Schools “Above and Beyond” Award.

Mitchell Ziegler is entering his 28th consecutive year advising the school newspaper, www.hightideonline.org and 26th advising the yearbook at Redondo Union High School where he teaches English, Photography and Advanced Journalism. He is the 2015 California Journalism Education Coalition Teacher of the Year.

Ziegler advises a newsroom staff of 50-70 students that publishes 16 20-page issues per school year. His students have earned several national awards including a H.S. Newspaper Gold Crown Award from CSPA in 2015.

Each Special Recognition Adviser will be presented a plaque at the National High School Journalism Convention and a digital subscription to WSJ.com.

Terry Cassreino has advised the school streaming sports radio station, the newspaper and the yearbook at St. Joseph Catholic School in Madison, Miss., for the past three years.

Cassreino holds dual bachelor’s in journalism and radio and television from the University of Mississippi. He spent more than 24 years as a reporter, political columnist and editor at Mississippi newspapers including positions as capitol bureau chief for The Sun Herald, managing editor of The Madison County Journal, and assistant managing editor for The Meridian Star and at the Hattiesburg American.

Alena Kay Cybart-Persenaire is the journalism teacher and Eagle Flyer newspaper adviser at John F. Kennedy High School in Waterbury, Conn., where she founded the journalism course. She was valedictorian when she graduated from the school in 1992.

She holds a bachelor’s in English and journalism from the University of Connecticut and a master’s in English education from Teacher’s College at Columbia University, where she is pursuing a doctorate in Interdisciplinary Studies in Education.

Thomas Kaup advises the Troy InVoice newspaper and The Invader yearbook at Auburn (Wash.) High School. He was the 2013-2014 Washington State Journalism Adviser of the Year.

Leland Mallett of Legacy High School, Mansfield, Texas, has been teaching journalism for 16 years. He advises The Rider newspaper and the yearbook. The Rider publishes two print editions and an online daily at www.therideronline.com.

Mallett holds a bachelor’s in Interdisciplinary Studies for secondary education with an emphasis on journalism and communications. He is a certified journalism educator through JEA.