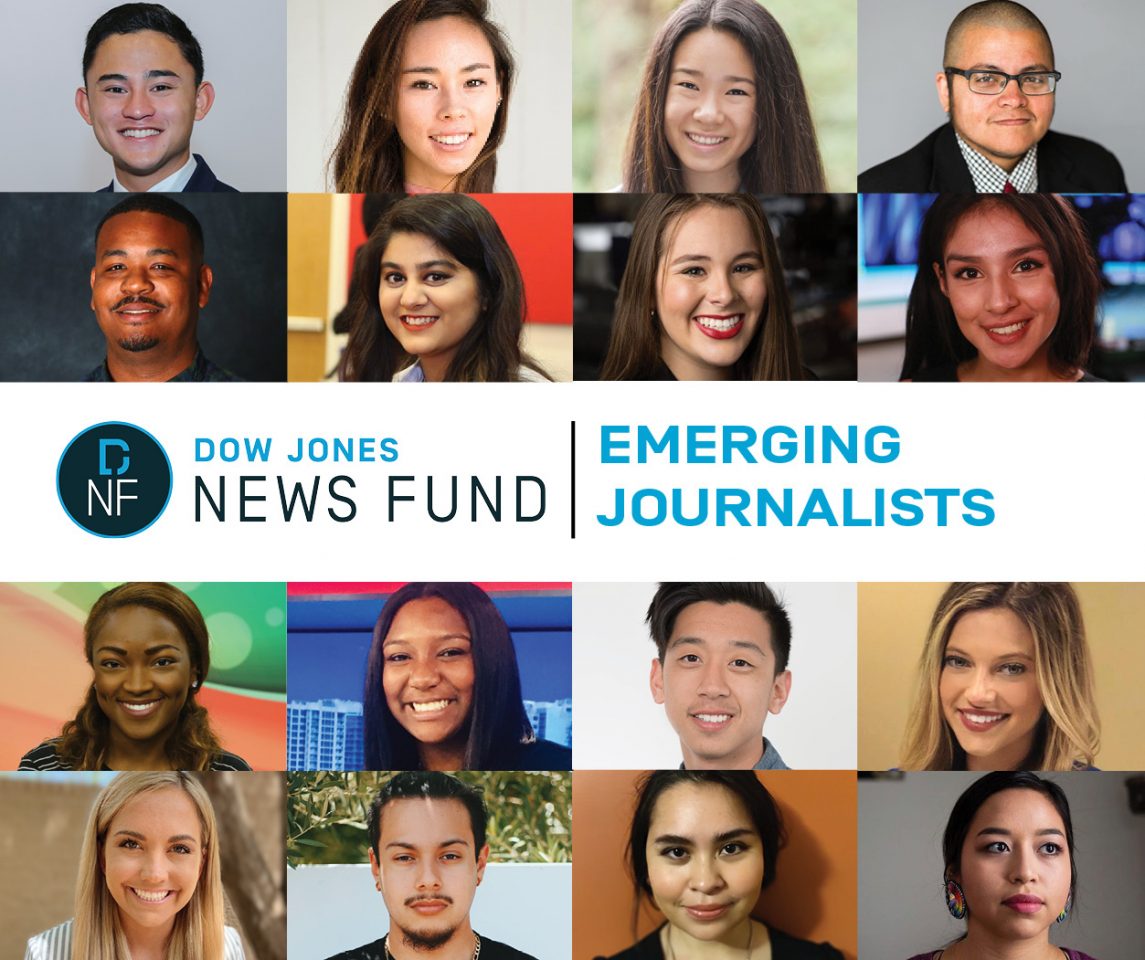 The program started last year awarding seven free registrations to students for five conferences. The aim is to offer opportunities for diverse students whether at universities or community colleges to build their skills and professional networks at these important gatherings.

Linda Shockley, DJNF managing director, said, “We know the career-building value of these conferences and wanted to make sure students of color and those in local communities can take advantage of everything they have to offer.”

Attendees will write and tweet about their experiences at the conferences. NAJA will provide travel and lodging for its attendees, some other non-local students are being sponsored by their universities.

The winners are listed.

Andrew Jones: Drew is a senior at the University of Houston; he will graduate this fall with a degree in journalism. He previously worked for The Daily Cougar as news editor and interned at the Houston Chronicle and Houstonia Magazine. Drew attended the New York Times Student Journalism Institute and ProPublica Emerging Reporters Program this spring. He is interested in learning more about the investigative reporting process and skills he can apply to his own reporting. Twitter: @drewkjones

Laraib Hashmi: Laraib is a recent graduate of the University of Houston where she was a staff writer for Cooglife, a student-run lifestyle magazine, produced stories and anchored for NEWSY and was a copy editing intern at the Houston Chronicle. At IRE, Laraib wants to develop better reporting and editing skills, such as identification of sources, story research, interviewing skills, fact-checking and investigative writing. Twitter: @itslaraaaib

Natalie Chinn: Natalie is a rising senior at New York University, double majoring in broadcast journalism and anthropology. She has worked for the school’s newspaper, Washington Square News, for two years as a senior editor for the culture and magazine desks. This spring, she was a digital intern at NBC New York. Natalie wrote she hopes to “learn how to cultivate a diverse newsroom that will be welcoming to all people and representative of voices that are often overlooked.”

Julia Lee: Julia is in the Reporting the Nation & New York multimedia journalism master’s program at New York University. She holds a bachelor’s degree in business and economics from Westmont College, Santa Barbara, California. She is interning at NBC News Digital on the Original Video Team. Julia hopes to network with other journalists and to better understand the media industry and potential career opportunities in video production. Twitter: @JLeeReporting IG: @julia.lee_

Jose Antonio Liboro Delgado: Anton is a Carnegie-Knight News21 Fellow this summer reporting on federal disaster relief. The Elon University rising senior is majoring in journalism and international studies. He has worked at Elon News Network for three years, next semester he will be the managing editor. At AAJA Anton hopes to improve his leadership capabilities, prepare for a successful journalism career and network with other Asian-American journalists. Twitter: @antonldelgado

Rachel Smith: Rachel is a rising senior at the University of Miami where she studies broadcast journalism and sports administration. At UM, Rachel has worked on a variety of digital media platforms from WVUM radio to Bleacher Report’s social media to UMTV where she has her own show highlighting the Black community, “The Culture.” Rachel is also a 2013 NABJ JSHOP alumna, a high school workshop supported by the Dow Jones News Fund. Twitter: @pwincessrachell

Aaron Jacob Cardenas: Aaron won the Oklahoma Society of Professional Journalists’ Pro Chapter first place award for diversity reporting in 2018. The San Antonio native is a rising senior at the University of Oklahoma where he majors in creative media production and journalism. He earned an associate’s degree in broadcast journalism from Oklahoma City Community College in 2017. Aaron works on the news crew of OU Nightly and is a stringer photographer for the Tulsa World. Twitter: @elguapo_ajc

Camelia Juarez: Camelia is a rising senior at Texas State University, earning a bachelor’s degree in communications and journalism. She is an Emma Bowen Fellow at the ABC-affiliated television station KSAT 12 and a former news director at TSU’s student radio station KTSW 89.9 FM. Since Camelia has mostly worked in TV and radio, she is excited to network and learn more about print and digital journalism at EIJ. Twitter: @CameliaJuarez

Sarah Beth Guevara: Sarah Beth, a rising senior at the University of Oklahoma, is president of the campus chapter of the National Association of Hispanic Journalists. Sarah Beth is a Carnegie-Knight News21 Fellow this summer. She is pursuing a bachelor’s degree in journalism. She will spend the fall semester in Washington, D.C., reporting for the Gaylord News Washington. Sarah Beth previously interned for the CBS-affiliate News 9 in Oklahoma City and the Enid News & Eagle. Twitter: @sarahbethatOU

John Christian “J.C.” Canicosa: J.C. is a rising senior at Loyola University New Orleans, where he is a senior staff writer for the award-winning student newspaper The Maroon. The mass communications major has interned at KRON 4 News in San Francisco and the NBC-affiliate WDSU News in New Orleans. J.C. is excited to learn more about the future of journalism at ONA from drones to VR to the next big digital tool or software application. Twitter: @jccanico

Tess Rowland: Tess is a mass communications major at Loyola University New Orleans. The rising senior has a passion for digital storytelling and audience engagement on social media. During internships at FOX 8 and WDSU, Tess was able to learn first hand how to develop story packages and build digital components. She continues to use these skills as as the lifestyle assistant editor for The Maroon, and editor for The Wolf, Loyola’s lifestyle and entertainment magazine. She is excited to attend ONA to learn new tools and strategies for creative audience engagement. Twitter: @TessrowlandTV

Addison Kliewer: Addison is president of the Native American Journalists Association chapter at the University of Oklahoma. Addison will spend the fall semester in Washington, D.C., reporting for the Gaylord News Washington wire service, before she graduates next May. As a person of Chickasaw heritage, she hopes to learn how to better cover Indian Country accurately and how to share this information with non-Native newsroom colleagues. Twitter: @addisonkliewer

Raphael Romero Ruiz: Raphael is a founding member of the newly-formed NAJA chapter at Arizona State University. The rising sophomore is double majoring in transborder Chicana/o and Latina/o studies and journalism. His goal is to increase the media representation of Latinx people. He is helping NAJA research how Native people consume tribal news as part of its Red Press Initiative. At the conference, Raphael is interested in connecting with members of the Raramuri tribe of Northern Mexico, of which he is a descendant. Twitter: @raphadelag

Miacel Spotted Elk: Miacel is a University of Utah rising junior who wants to use data tools to shine a light on issues like violence against indigenous women and inequities in schools on reservations. The Salt Lake City native and Navajo Nation member is an editorial intern for the Salt Lake City Weekly and writes for the Daily Utah Chronicle student newspaper. Twitter: @MiacelSelk

Jordynn Paz: Jordynn is a rising senior majoring in journalism and Native American studies at the University of Montana. Jordynn is a member of the Crow tribe, she looks forward to attending the National Native Media Conference to hear from other indigenous journalists about their experience working in newsrooms and accurately reporting on Indian Country. Twitter: @jordynn_paz