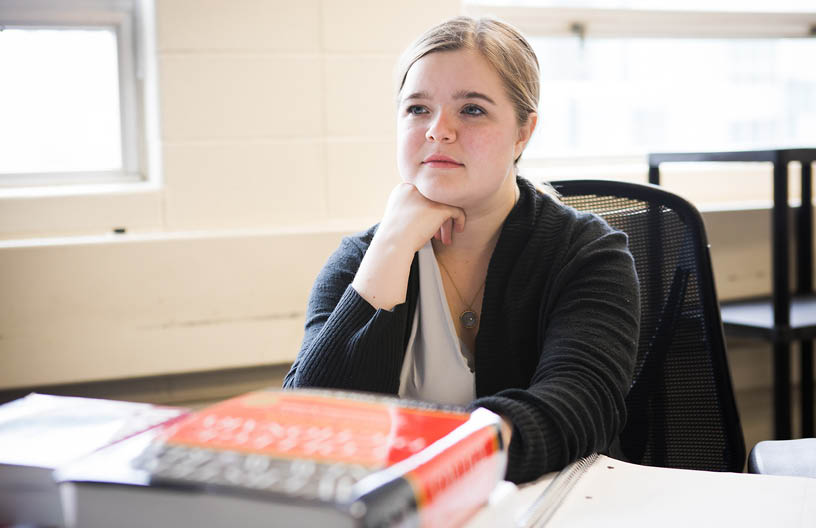 PRINCETON, N.J. — Lillian Barkley, a 2017 Dow Jones News Fund multiplatform editing intern at The New York Times, is the 14th Edward Trayes Scholar. She was selected by the professor who celebrated his 50th summer last year directing the training program at Temple University.

Barkley, who attends the University of Illinois at Urbana-Champaign where she is editor-in-chief of The Daily Illini, will receive a $1,000 scholarship and join 13 Trayes scholars who have gone on to be exemplary journalists.

The O’Toole Family Foundation of Short Hills, New Jersey, began the scholarships in 2004 to honor Trayes. Paula and Terry O’Toole, a 1979 copy editing intern at The Wall Street Journal, have donated $20,000 toward the scholarship fund.

To commemorate the 50th anniversary of the Temple residency and to underscore the importance of an accurate and free press, the O’Toole Family Foundation commissioned a short film about Trayes and his unique approach in 2017.

As the film highlights, for many students who go through Trayes’ rigorous training program, it is a rewarding experience.

Barkley said, “Dr. Trayes was very good about making us skeptical of ourselves and teaching us not only the hard skills of memorizing AP Style and The New York Times stylebook, but also teaching us what to look for, how to second guess ourselves, and check every fact because even the smallest detail that you assume is right could easily be wrong.”

Barkley excelled during the training program and her internship.

“Lillian seems to live and breathe journalism,” Trayes said. “There is little doubt in my mind that she soon will begin making a difference wherever she is in the world of professional journalism.”

He said, “Lillian was a fantastic copy editor on the Weeklies copy desk. She handled a wide range of work for sections like Sunday Styles, Travel and, her favorite, Food. She is extremely calm under pressure, and she demonstrated great care in her editing.”

“Throughout all of that, my slotters and editor were all so welcoming and were always really great about giving me feedback, giving me pointers, and also letting me learn on my own,” Barkley said.

She added, “The Times is great, and an incredible experience to work there, but I also think it was increased by working with a really great desk of people.”

Barkley returned to Illinois in September where she will receive concurrent bachelor’s and master’s degrees in journalism in December. She will begin looking for reporting and editing jobs after she graduates. Her dream is working as a food editor or restaurant critic.

At college, she joined the staff of The Daily Illini as a features reporter. Throughout college she held a number of positions — staff reporter, copy editor, features editor, and was promoted to editor-in-chief last spring.