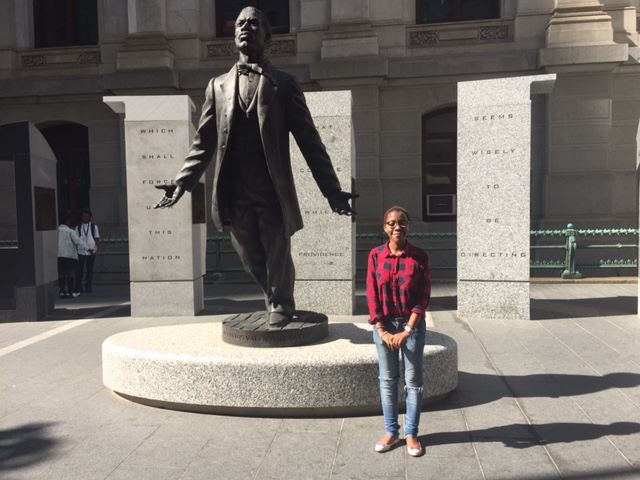 PRINCETON, N.J.—It started with a video then a question out of left field, or more accurately, out of the Southern Hemisphere.

Greg Rosenberg, managing director of Clarity Editorial in Capetown, South Africa, saw an online video last summer marking the 50th anniversary of the Temple Center for Editing Excellence taught by Dr. Edward Trayes. The O’Toole Family Foundation commissioned the film, which was posted on the website of ACES: A society for editing.

He said, “I opened up the film and I couldn’t stop watching it. It was fantastic.”

Clarity Editorial is a strategic communications company that assists clients like the World Bank, foundations, and the South African government by editing lengthy, complex documents and high-level reports so that they can be understood by interested members of the public, journalists, business persons and others, he said.

He said once she returns he would like to have Ndlebe do more substantive, mainline editing and become involved with more analytical content editing.

For Ndlebe coming to the United States was a childhood dream inside a larger aspiration. She said, “Before I joined Clarity Editorial, I thought I was doing good editing. I thought ‘I had this.’ Now being part of Clarity showed me, opened my mind and my eyes to what actually is editing.”

“As an editor it is a wonderful experience to see the final work that you have done, somehow creating logic if there wasn’t any at all from the other side and having coherence,” she said.

Shy and soft spoken, she said it was hard to work in a team editing the South African Estimates of National Expenditure, a budget document of several hundred pages of technical information and to explain to writers why changes had to be made in their original prose. She did her job but it was an experience that made her want to be confident in her editing, she said.

Rosenberg said her writing also shows flair. “Every copy editor has a writer hidden inside waiting to burst out,” he said.

Ndlebe blogs on writing, editing and other topics. She wants to publish a book examining domestic abuse of South African women by their partners starting with a woman who escaped abuse, another who remains in a bad relationship and, finally, one who did not survive. She said incidents are trending on social media. She uses Twitter but left Facebook two years ago to avoid its clutter and noise.

The 2015 graduate of Tshwane University speaks five languages — English, Afrikaans, Sesotho (from her home region, the Free State), Setswana and Zulu. She said her Zulu first name Bongiwe means “we are thankful.” She is also learning Xhosa.

Ndlebe joined the Temple interns for the traditional run up the “Rocky Steps” at the Philadelphia Art Museum June 2 and stayed in Philadelphia for a few days of sightseeing before heading home to Capetown.