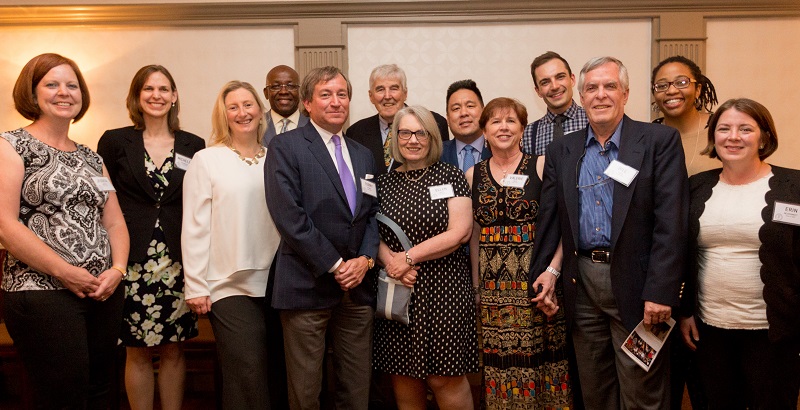 Alumni from 1974 through 2014 pose with Dr. Trayes at the Celebration of Editing Excellence.

PRINCETON, N.J. — The Dow Jones News Fund marked the 50th anniversary of its editing internship programs and the 50th summer Dr. Edward Trayes has led the Center for Editing Excellence at Temple University with a celebration Saturday in Bryn Mawr, Pennsylvania.

Friends, family, colleagues and internship alumni shared laughs and a few tears remembering how the Marine drill sergeant, bear of a man and teddy bear, demanded their best. The evening’s running theme was, “The internship program changed my life.”

Dr. Trayes was a key instructor of the News Fund’s pilot copy editing program at Temple University in 1968, collaborating with his mentor and DJNF executive director Paul Swensson, who launched a similar course at the University of Nebraska.

Swensson’s “experiment” proved bright college students could work as copy editors without prior professional reporting experience. With Swensson’s successor Thomas Engleman, he continued to hone the program and has run the training at Temple for 50 summers.

Reflecting on his work, he said each journalist goes on their own journey. “It’s the lessons and values we impart to them that will have a lasting impact.”

This summer’s 11 interns, who will work at The New York Times, Philadelphia Inquirer and Daily News, introduced themselves to the audience and told what they learned: “Not to doubt yourself,” “Know what you don’t know,” “Try to do your best no matter what” and “Never underestimate your ability to learn new things.”

David Boardman, dean of the Klein College of Media and Communication at Temple University, and a former copy editor at The Seattle Times, praised the internship program. He arrived at Temple four years ago from the newspaper, where he was senior vice president and executive editor with four Pulitzer Prizes under his leadership.

“The editors who come out of it are prepared to save their future colleagues not only from dangling modifiers, but from multimillion-dollar lawsuits, public ridicule and a continuing erosion of trust,” he said.

Dr. Trayes has trained nearly 700 interns for DJNF, among them many successful journalists working throughout the country. Alumni from 1974 through 2014 toasted, posed with and congratulated him. They compared notes with current students on studying all night for innumerable spelling, geography, AP Style and grammar tests.

Terry O’Toole, a 1979 intern at The Wall Street Journal, who co-sponsored the celebration, established the Edward Trayes Scholarship in 2004 to honor his mentor. The O’Toole Family Foundation, run with his wife Polly, commissioned a short film for the occasion.

While a tribute to Dr. Trayes and the editing program, the film is also an ode to the importance of an accurate and free press. It featured alumni who work for The Associated Press, The New York Times and TODAY reflecting on the standards and values at the core of the program.

Garry Howard, a 1981 alumnus and director of corporate initiatives at American City Business Journals, told the audience Dr. Trayes set a high standard by sending him to a prized internship at Dow Jones. “Here’s the bar. Go get it.”

Ryan Weber, 2014 Trayes Scholar and multiplatform editor at The Washington Post, said, “I learned how to edit and trust myself. I could not be where I am today without this program.”

Mr. Engleman, DJNF board member and former executive director, said: “Ed, The news industry, thousands of college students and hundreds of program alumni thank you for being a pioneer in the art of editing.”

In his remarks, Dr. Trayes said, “You’ve got to have courage. You’ve got to want to do this more than anything else you are doing. It’s not how big the paper nor how small, it’s about doing your best and going to work happy.”

He said, “Common ground and mutual respect, it has to keep going. We can never give up, we must keep fighting. We stand because we matter and we’re going to keep it this way.”