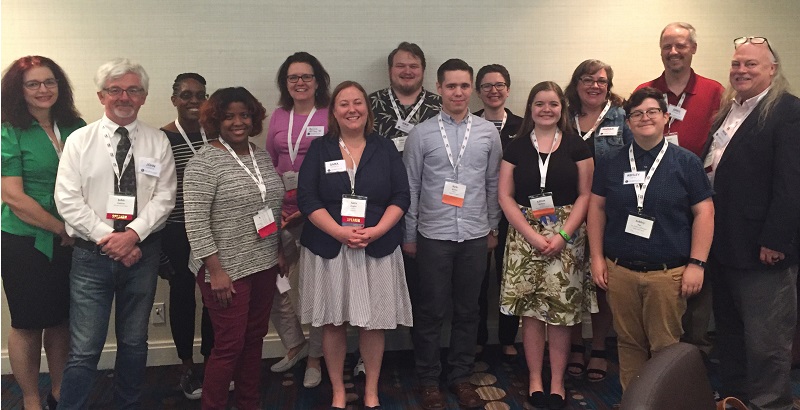 Some of the attendees at the alumni luncheon at ACES gather for a photo.

More than 24 current and former interns, residency directors and instructors attended a box lunch meetup March 24. We encouraged everyone to check out the new website and to think of ways they can help the Fund by mentoring interns, recruiting news media and more.

Dr. Rick Kenney, Virginia Commonwealth University ’79, autographed copies of “Copy! The First 50 Years of the Dow Jones Newspaper Fund,” which he wrote in 2009. Chair of the department of communications at Augusta (Georgia) University, he directed editing residencies at Florida Southern University and the University of Central Florida.

John Oudens and Wendy Wallace, Temple ’83, reminisced about their training. Oudens is an editor at The New York Times and Wallace is director of advancement at the Poynter Institute for Media Studies. Oudens, his spouse, Susan Keith, chair and associate professor of journalism and media studies at Rutgers University, and Kenney presented a session on fixing sports journalism errors.

Karen Yin, a former high school journalism workshop participant, won the Pam Robinson Prize for for her exceptional work on inclusiveness as founder of the Conscious Style Guide. She and Dr. Steve Bien-Aimè, NYU ’02, Temple ’03, joined Kenney on a panel about ferreting out hidden bias in language.

Dr. Alyssa Appelman, University of Central Florida ’06, organized and presented a panel on the latest research on editing with Kenney, Keith and Dr. Bien-Aimè.

Interns from 2016 and 2017 attending the convention as ACES scholarship winners got a chance to meet alumni at the lunch.