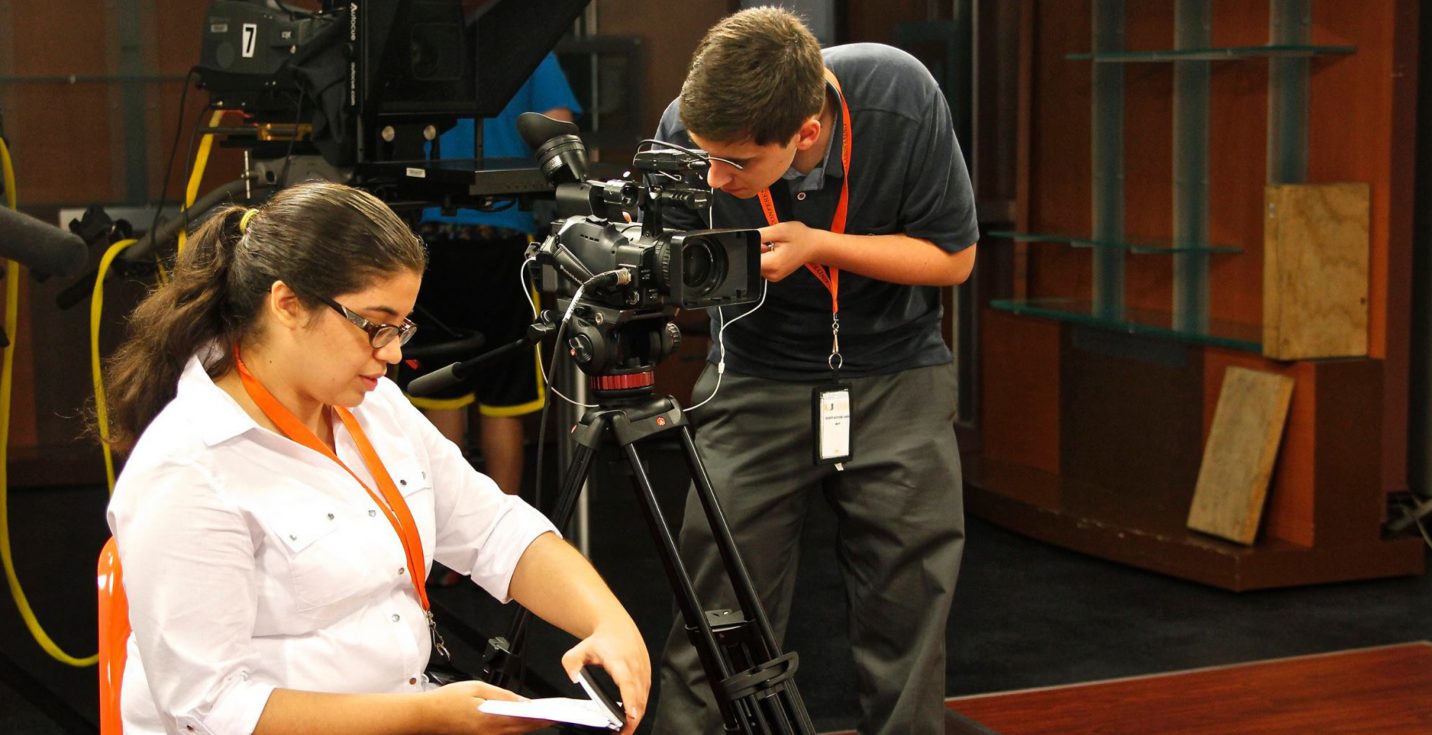 Scholarship winners Nathalie Mairena and David Perez at the Peace Sullivan/James Ansin High School Workshop at the University of Miami.

The Dow Jones News Fund, a nonprofit foundation that promotes careers in journalism in the digital age, provides grants to support workshops that train high school journalists. In 2015, 19 students were nominated for scholarships from the 21 workshops DJNF sponsored. The eight winners will receive $1,000 college scholarships.

“In awarding scholarships, the Dow Jones News Fund encourages these journalists to continue cultivating their passion for the craft,” said Linda Shockley, managing director. “The summer workshops are designed and implemented by educators and journalists to launch careers just like those of these bright stars.”

Kayla Hamlett’s dream is to one day become a news anchor on CNN, Good Morning America, or The Today Show to inform others about news in a positive way. To reach her goal Hamlett is studying journalism at the College of Communication and Information Sciences at the University of Alabama, where she attended the university’s Multicultural Journalism Workshop last summer.

Workshop director Meredith Cummings nominated Hamlett for the Dow Jones News Fund’s scholarship, noting that her only prior experience was in broadcast journalism but through “sweat and sheer will” she got the story.

Read Hamlett’s article “Fighting Dirty,” about the recent machinations of a century-old “super fraternity” at the University of Alabama called The Machine in the workshop newspaper, The MJP Journal (p.12).

Cummings wrote: “Kayla not only took the lead on the website for our workshop, but also did a phenomenal job writing and understanding a 100-year-old issue in Tuscaloosa at the University of Alabama. She scouted out interviews from ex school-board members and was tenacious in her reporting. She was able to capture and convey an incredibly complex and nuanced issue after only three days with us.”

Nathalie Mairena participated in the Peace Sullivan/James Ansin High School Workshop in Journalism and New Media at the University of Miami. Mairena reported on the dangers workers face in recycling centers in her story “Sort of a mess” for the Miami Montage.

Workshop co-director Fred Blevens wrote in his recommendation: “Nathalie turned a routine feature into a layered, textured examination of municipal recycling programs. Her deep, thoughtful reporting was paired with a wonderful narrative touch.”

For Mairena, whose parents come from the free speech-restricted countries of Nicaragua and Colombia, it would be a dream to be the first in her family to finish college and to pursue a career in journalism.

In her essay she wrote, “Studying journalism in college is the ultimate of all my dreams and those of my parents. Journalism is the task of bettering the world, of making an impact. I don’t know what could make my parents more proud then pursuing the things they hold dear, truth and knowledge.”

Mairena is a senior at Miami Lakes Educational Center where she is the managing editor of The Harbinger student newspaper.

Mairena wrote, “Through journalism, I’ve honed the ability to lead and sharpened my writing skills while living up to the cherished family value of freedom of speech.”

Alex Schley participated in the New England High School Journalism Collaborative Summer Workshop in collaboration with The Boston Globe at Regis College. Schley wrote the cover story for The Zephyr newspaper titled “Getting a Grip on Heroin Addiction,” which focused on a 19-year-old recovering addict.  According to NEHSJC director Milton Valencia, “Massachusetts is suffering a deadly crisis and Alex got to the core of it.”

Schley’s personal essay shared a formative lesson from high school in which she was involved in a long battle between teachers and the school administration – first as a student, then as a journalist. “It was after this experience that I really understood the power of writing, the power of journalism.”

Schley, now a freshman at American University in Washington, D.C., says she chose to attend college in the nation’s capital to pursue her two passions, journalism and politics.

“Studying communications in the heart of the city that is home to the best political journalism in the world is an unparalleled opportunity,” wrote Schley in her essay. “Journalism is so important to me because the press is commonly regarded as the fourth branch of government, acting in congruence with the checks and balance system to sustain America’s democracy.”

Samanta Carias, a senior at Hialeah (Florida) High School, came to America at the age of 10 from Honduras not expecting to be able to go to college. Before long, Carias was succeeding in high school and realized college was not a distant dream.

It was Carias’ picture for Miami Montage, published by the Peace Sullivan/James Ansin High School Workshop in Journalism and New Media at the University of Miami, which earned her Dow Jones News Fund scholarship. Her photo accompanied Nathalie Mairena’s “Sort of a mess” story, showing the dangerous conditions employees face in a recycling center.

Blevens wrote in his recommendation, “An excellent shoot in dark anddusty conditions, expertly capturing the difficulties involved in recycling. Thecomposition elegantly, but strongly, draws the eye to material in the bin, softly portraying a lone worker sorting through the mess.”

Carias wrote in her essay: “With every article I write and every photograph I capture, I experience a catharsis of sorts; immediately I feel the rush that comes with doing what could not be done in my homeland. I was raised in fear, in a country that does not offer the press protection from gangs seeking retribution after an unfavorable story. Freedom of expression is my ultimate tool, fueling my passion for journalism. College will be my new frontier in the journey from repression to expression.”

According to David Guirgis, he had never taken a real picture until he attended New York University’s Urban Journalism Workshop last summer where he had the opportunity to work with a professional camera.

Guirgis, a senior at Ronald McNair Academic High in Jersey City (New Jersey), is excited and ready to work in the new media landscape. He wrote in his essay, “Our stories aren’t simply words anymore; we supplement the stories we want to tell with raw footage, multimedia visuals, and photographs.”

For the competition Guirgis shared a series of photos he took toaccompany a profile of a Washington Square Park street musician. Guirgis wrote, “Writing about Dusty Rhodes, the charismatic saxophone player I profiled, was one thing. Capturing him in his essence was another thing entirely.”

In his nomination of Guirgis, UJW Program Director Adrian Mihai wrote: “He stepped forward with determination, pointing with courage his lens at unknown street performers to capture well-chosen aspects of their art and demeanor. His photo reportage brings to light intimate details and has a powerful impact on the viewer.”

Andrea Czobor began her journalism career at The Woodlands (Texas) High School where she was anchor of Highlander Television; President of SkillsUSA, a broadcast and film organization; and writer and multimedia producer for The Woodlands Online.

Czobor is a freshman at the University of North Texas, where she attended the Mayborn Multimedia High School Journalism Workshop.

At the workshop, Czobor produced a video segment on race, equality and diversity in the media, in which she interviewed Dallas Morning News columnist Chris Vognar and Jeff Chang, journalist and author of “Who We Be: The Colorization of America.”

Czobor found the experience empowering, she wrote in her essay, “The workshop had introduced me to two impactful authors I connected with, helping me to realize that with what I have around me, I am capable of changing the world one article and one video at a time.”

Workshop director David Tracy wrote, “In my teaching experience, Andrea is the most promising young journalist I have met, and I believe she will be able to accomplish anything in this profession that she chooses.”

Czobor’s goal is clear. She wrote, “There is much change to be done, so many voices to uncover, but with what tools given to me and skills I have gained, I can make a difference with the career I am so passionate for.”

David Perez, a senior at Christopher Columbus High School in Miami, dreams of becoming a broadcast news anchor guided by a strong work ethic and commitment to truthful reporting.

He started his journalism career at the high school television station, where he earned an Emmy for a Serious News Story. This past summer he honed his video reporting and editing skills while attending the Peace Sullivan/James Ansin High School Workshop in Journalism and New Media at the University of Miami.

At the workshop Perez produced the video “Keeping the Tradition Alive” about the impact of climate change on a local fishing business.

Perez wrote in his essay: “While working with professionals, I have sharpened my skills for the next chapter of my career, journalism at the university level. I am confident that with hard work and the skills I have attained through Miami Montage and high school, I can continue to fuel my fire and become the professional journalist I aspire to be.”

Ever since elementary school Ximena Tapia knew she wanted to become a journalist. She began her journey in fourth grade, signing up to do the school’s televised morning announcements and becoming captain of the news team. She continued her journalism training through middle school and high school, honing her filming, editing, reporting, photography, and radio skills.

While she loved being a journalist, she was also considering becoming an elementary school teacher. Tapia said any doubts she had were quickly erased after attending the Journalism in July Workshop at the University of Texas at El Paso.

She wrote in her essay, “After putting together my video story and seeing the final result, I knew that this is definitely my passion. I absolutely love researching, interviewing, filming, editing, writing, and informing people about what is going on in their community.”

Tapia used her bilingual skills to produce her video report about a soccer club in the Segundo Barrio section of El Paso in Spanish.

Tapia wrote, “I am especially interested in reporting bilingual stories. I grew up in a Spanish-speaking household and enjoy speaking the Spanish language. Especially because I live in a town close to the border, I believe that it is important to also provide news for those who do not yet speak English.”