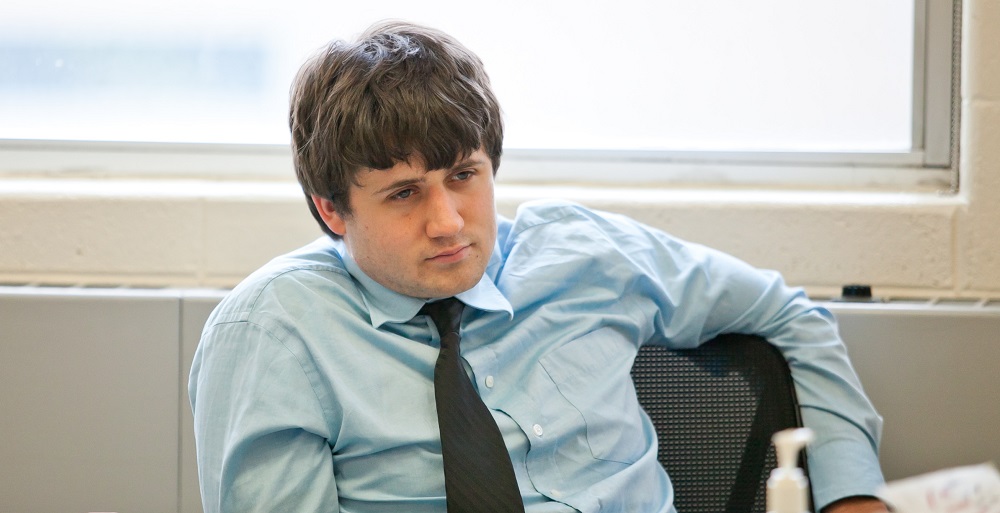 PRINCETON, N.J. — Ryan Quinn, a reporter at The State Journal in Frankfort, Ky., is the 2012 Edward Trayes Scholar. Quinn was a DJNF summer news editing intern at the New York Times Regional Editing Center in Gainesville, Fla., after training with Dr. Ed Trayes at Temple University.

Quinn, who graduated from the University of South Carolina in May with a degree in journalism, is the ninth recipient. The recognition comes with a $1,000 scholarship. The Trayes Scholarship is endowed by Terrence O’Toole, a 1979 graduate of the Temple residency, through The O’Toole Foundation of Short Hills, N.J. O’Toole committed to fund the scholarship for 10 years in 2004 marking the 25th anniversary of his participation in the program.

Dr. Trayes said, “In many ways, Ryan is a throwback in terms of his work ethic, his enthusiasm for a career in journalism, and his determination to succeed. Ryan was outstanding during the editing residency at Temple. He pushed himself every day to do his best…Ryan shows great promise as a journalist.”

Shortly after Quinn was selected for the internship, it was announced The New York Times Regional Group was being sold to Halifax Media Holdings. It wasn’t clear if the regional editing center was part of the deal. He admits to some anxiety.

He called his classmates at the residency, top-notch. “They were just the greatest editors I’ve ever met.”

Quinn said he and other interns were impressed with the resources invested in the training, especially the books, which they carried everywhere.

“Free Associated Press Guide, New York Times Stylebook, Strunk and White, all of these different books, great almanacs, were just given to us,” he said.

He appreciated the Times stylebook, which is markedly different from the AP Style he’d become so familiar with. The training in Philadelphia, he said, made him a sharper editor.

Quinn called his work on the international weekly a “globetrotting reading experience.” What might be important to American readers was not necessarily a priority to readers of the China Daily or Toronto Star. Knowing what to tease on the front pages for the different issues, say in Latin America, was a skill he had to develop fast. Training in geography, international datelines and the like were also valuable, he said.

“Certainly I learned a lot more about the world by simply having to read and read and cut these New York Times articles.”

He also gained appreciation for the art of design. “It is very difficult and I never realized how difficult it was until I did it,” he said.

“The thing about design is that now when I look at my paper or any paper, I have this eye for design now – it’s not a designer’s eye – but I can see widows and captions that need to be filled out. The New York Times is very specific about how the paper should look and it looks very good when it comes out.”

Quinn said he has learned a lot about where the news business is headed, and about people.

“I got an understanding of how good people create a good product, I’ve gotten a good understanding for the people that are behind the scenes that who don’t get a byline,” he said.

Quinn said he doesn’t necessarily envision himself in a bigger news organization – lots of smaller papers need good, young reporters. He covers police and the city commission and got a taste of local elections this year. He said he could see himself covering education or state government or perhaps another beat.

He noted Frankfort is a small capital city that fills with state workers each morning and empties each evening. “For the first time in my life, we are pretty much the only news in town. You have to get it right. You are mouthpiece for the only game in town. It’s huge a responsibility,” he said.